15 Sep What Effect Does “Climate Change” Have on Human Life?

Posted at 15:53h in Voluntary Exchange Sources by one80Admin

Wealth is our protection against the potential effect of climate change.

What effect does it have on human life? This is the only appropriate way to consider the risks from “climate change.” 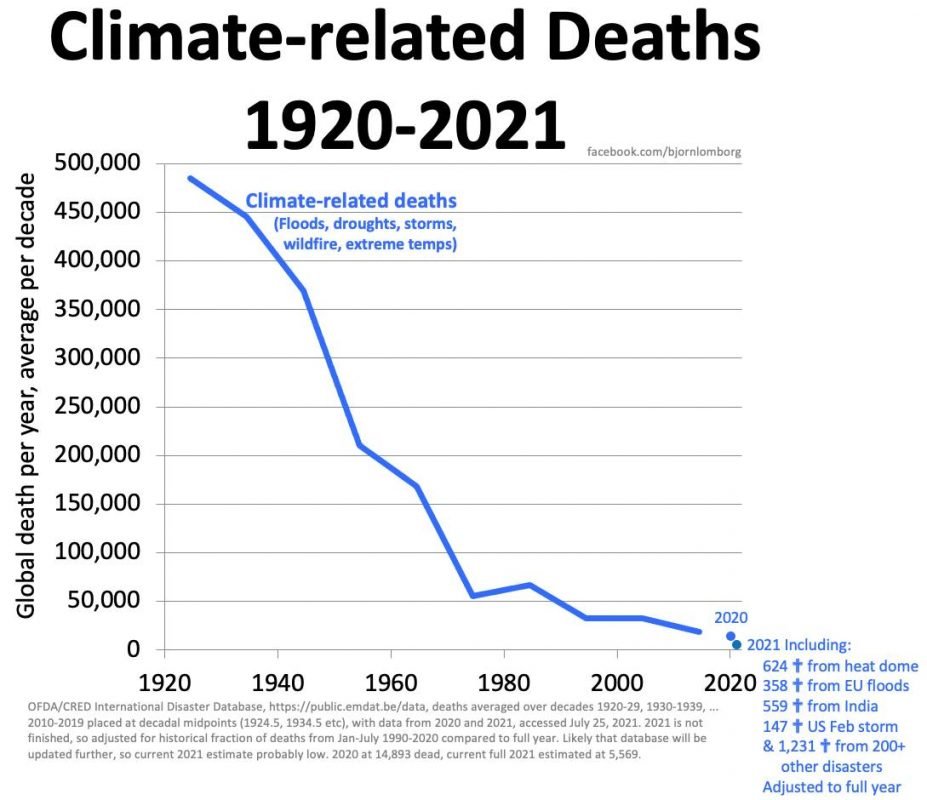 This chart (by Bjorn Lomborg) is a July 25th, 2021 chart of humans deaths due to severe climate events. It even includes the 358 deaths from the recent European floods, although it doesn’t include the several dozen who died a few days later in China.

What accounts for this dramatic decline in human climate-caused mortality? Is it that there are fewer major climate events? That is unlikely. In fact, the news media presents a portrait of more frequent and ever-worsening climate events.

Well, why have fewer people been dying? This is not due to any change in the frequency of the events. There cannot have been such a major decline to account for the decline in mortality.

The answer is item 2: resiliency. Human resiliency to climate events has dramatically improved due to the fact that we have become wealthier. Consider the frequency of flooding deaths in Holland versus Bangladesh. Holland has not had a flooding death since the 1950s when it spent billions of dollars to install a state-of-the-art flood control system. Yet, every year Bangladesh has hundreds of deaths due to perennial floods because it cannot afford to build a proper flood control system.

Modern steel-and-concrete buildings stand up to hurricanes; wooden shacks do not. Air conditioning protects the elderly in cool, comfortable homes from heat waves; elderly living without electricity in Africa or India die from those heat waves.

Wealth is our protection against the potential effect of climate change.

But here is the kicker. Wealth requires the freedom to manufacture things, which means wealth involves the production of carbon dioxide, a gas that contributes to global warming.

So, this means that the effort to reduce carbon dioxide emissions by shutting down and restricting industry must make us poorer, which means: less resilient to the effects of climate change.

Only a wealthy society has the resilience to withstand hurricanes, floods, and heatwaves. The only pro-human policy on climate change is freedom, even if it means somewhat higher temperatures due to more carbon dioxide in the air.

I would rather live in the Netherlands, with its much higher per capita rate of carbon dioxide emissions than in the more carbon-free country of Bangladesh.

Raymond C. Niles is a Senior Fellow the

and Assistant Professor of Economics & Management at DePauw University. He holds a PhD in Economics from George Mason University and an MBA in Finance & Economics from the Leonard N. Stern School of Business at New York University. Prior to embarking on his academic career, Niles worked for more than 15 years on Wall Street as a senior equity research analyst at Citigroup, Schroders, and Goldman Sachs, and as managing partner of a hedge fund investing in energy securities. Niles has published a book chapter and numerous articles in scholarly and popular publications.