15 Apr Who Will Reopen the Economy—the President, the Governors, or the People?

Posted at 17:54h in Voluntary Exchange Sources by one80Admin

Responding to President Trump’s claim on Monday that he had “total authority” to decide when to “open up the states” and the economy, Washington Post columnist Eugene Robinson wrote:

Trump is not the one who decided to shut everything down: He never issued a nationwide stay‐​at‐​home order. We are sequestered and socially distanced because our governors and mayors told us we needed to be.

But that’s not really true. We’re mostly staying home because we decided to — we as individuals, and businesses, and civil society. Consider this timeline of decisions:

And look at this chart from OpenTable, which shows that in various states restaurant reservations began falling as much as 20 days before the state issued an order closing restaurants, and plummeted around a week before the order. 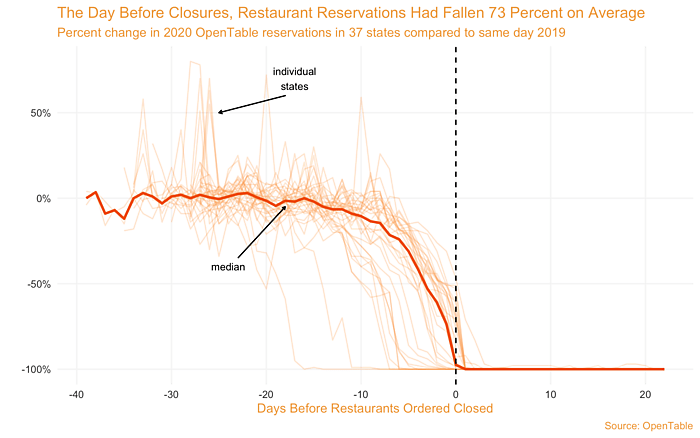 As Charles Fain Lehman of the Washington Free Beacon notes, polling data show that Americans are skeptical about going back to work, shopping, and transportation. “Recent data from Axios/​Ipsos show that large majorities consider common public activities, like going grocery shopping or attending a family gathering, to be a large or moderate risk right now.… Data from the Harris Poll show that a majority of Americans believe that more than a month is needed before they should ‘start returning to work and life as normal.’ A Seton Hall poll found that 72 percent would not attend sporting events until a vaccine for SARS‐​CoV‐​2 is found.”

So it’s not just a matter of either the president or a governor issuing a “back to work” order. Lots of Americans are going to be concerned about returning to normalcy. And while many people are bored or stir‐​crazy or simply missing normal interaction, we’ve also learned a lot about how to work remotely. There may be unanticipated changes in lifestyle and work arrangements as a result of our forced confinement. Forced, I would suggest, at least as much by the coronavirus as by any governmental order.

And by the way, Robinson knows that:

Imagine that Trump were to unilaterally set a date certain for social distancing to end — May 1, say, or May 15, or perhaps June 1. Imagine, improbably, that all state and local officials went along. What would you do?

Would you go to the office as though the covid‐​19 pandemic had never happened, as if patients were not still fighting for breath and life in intensive care units? If you’ve been working from home, would going back to the office even be an option you would consider? You will recall that private companies were early to institute work‐​from‐​home policies, even before local governments issued blanket orders. Will business executives order employees back into their cubicles if the danger remains that they will infect one another, leading to further shutdowns?

Would you feel safe on a crowded bus, commuter train or subway car?

I think he was just a little too provoked by Trump when he made that claim that got my attention. With the spread of the virus apparently not yet peaking, and a vaccine far in the distance, it’s understandable that 81 percent of Americans say we should keep social distancing despite the damage to the economy. My friend Jonathan Rauch of the Brookings Institution says that both a viral surge and a continued lockdown are unacceptable, and the only alternative is to vastly increase testing and tracing — which will also not be easy.

But whatever it is, the economy will not roar back to life until people feel safe enough using transportation, going to workplaces, shopping, and dining out. No political leader can issue an order and make that happen.